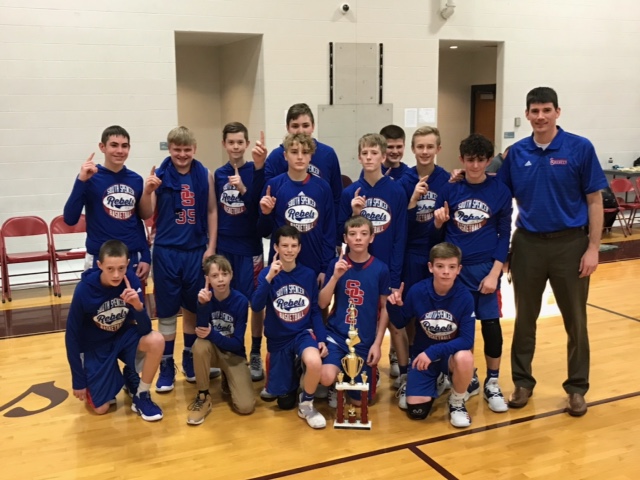 The 8th grade boys brought home the PAC tourney trophy after winning 2 games at Pike Central. The boys went undefeated in conference games through the regular season as well! The Rebels played Tecumseh in the first game and won 34-32. Tecumseh led for the entire first half and part of the 3rd quarter before the Rebels pulled ahead by a couple buckets. The Rebels then spread the floor and played ball control offense for much of the rest of the game to preserve the small lead. Cale Donoho led the team with 12 points.

Forest Park defeated Heritage Hills in the other semi final game to set up the championship between the Rangers and Rebels. The Rebels started slow but eventually fought to a tie at the end of the 1st quarter. The Rebels started to pull ahead from there thanks to good team play, ball movement, and solid defense. The Rebels held Forest Park scoreless throughout the 3rd quarter and would eventually build a lead of over 20 points. The Rebels were led by Nathan Hurt with 15 points. Kaydin Duvall added 11 on his birthday.

The boys record is currently 20-2. The Rebels will now compete in the Jasper tourney, which starts Tuesday with a game against Holy Trinity. Game time is scheduled for 6:15. If the boys win, they would then play on Thursday, with the championship scheduled for this coming Saturday. All games will be played at Jasper Middle School.